Decision is in: Too many Georgian wines are fakes 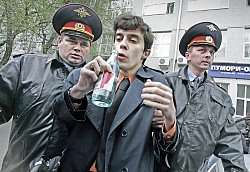 When Russia slapped a ban on the import of wines from neighboring Georgia and Moldova, merchants in the smaller countries loudly protested.

Russia's health ministry said too many of the wines from their former partners in the defunct USSR were health hazards because of impurities and intentionally deceptive ingredients.

Turns out the Russians were correct, at least in the case of Georgia. The United Nations Food & Agricultural Organization (FAO) now says its tests show that 90% of Georgian wines sold abroad are counterfeit, and 80% of what Georgia exports is sold in Russian markets.

Back in May, Georgian President Mikheil Saakashvili served wine to his cabinet ministers -- "special" blends of several varieties of foreign counterfeits of Georgian wine. He was making the point to chastise government ministers for not assertively promoting Georgia's wine abroad, thereby allowing bogus brands to take a share of the market.

Police have been arresting sellers and purchasers of phony Georgian wines (as seen in the photo above), but the problem has broad reach in this area of Europe.

Georgia has a long winemaking tradition and for years had a good reputation in Europe, but the FAO says current practices range from alcoholic cocktails mixing spirits, colorings and flavors to wines bearing false appellations of origin.

Emmanuel Hidier, of the FAO Investment Center, said in a statement that the Georgian government had made some progress in crushing the fake wine market at home, but the situation had barely improved for wines sent abroad.

The FAO has been closely involved with Georgian wine since 2000, when the government asked it to help draft the country's first wine law. That law paved the way for Gerogia's first appellation of origin system, similar to those seen in other wine countries. Winemakers are required to reveal where they got their grapes and how they made their wine. A loophole used by counterfeiters takes advantage of the fact that no official documentation is needed to transport wine in bulk or in bottles within Georgia.

The FAO said it was now helping the Georgian government create a new oversight agency to improve implementation of the wine law. 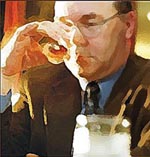